For Part Two of my six-week series, we will take a stroll to one of New York’s famous landmarks and  give those attending the conference, a sight that can be seen during odd hours and within walking distance of your hotel.

The skating rink during warm months

Today I give you my homage to the magnificent edifice of Rockefeller Plaza and my cherished memories of the Radio City Music Hall.

As a child, I cannot remember a Christmas when we did not go to The City, walk around Rockefeller Plaza to see the tree, and the show at the Music Hall.

The Radio City Music Hall was to my mother the holy grail of events. Not wind, nor storm nor dead of night could keep her from her appointed mission, to herd eight to ten children with her two girlfriends as point and rear guards to the Christmas and Easter shows at the Music Hall.

It was not “are we going this year?” But “on which day are we going?”

We gathered at dawn with blankets, pillows, coffee, hot chocolate, and buttered rolls, and took the long subway ride from Brooklyn to Rockefeller Center. Soon the early hour and the motion of the trains, lulled us to sleep, resting our heads on each other’s shoulders or their laps.

With a round of hands clapping, we woke at our destination, yawned and rubbed our eyes … we were almost there.

Walking towards Rockefeller Center was always a delight. We were no longer sleepy or hungry and turned slowly in a circle to capture all the sights and sounds around us.

Rockefeller Center is an art deco marvel consisting of nineteen commercial buildings covering eleven acres in midtown Manhattan from Forty-Ninth Street to Fifty-Second Street, from Fifth Avenue to Seventh Avenue, with smaller buildings in a rectangle. 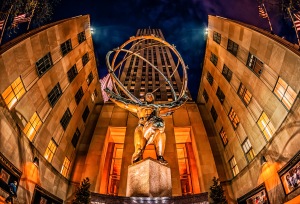 On the first floor of these buildings are exclusive shops, their windows lit up and decorated for the holiday season. The tall building in the middle, Thirty Rockefeller Plaza, or as it is called, 30 Rock, looms over a golden sculpture of Prometheus which sits below the giant tree as a symbol of opulence for tourists and native New Yorker’s to enjoy. 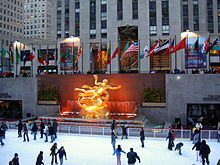 Inside the open rectangle of buildings is the ice rink, and on the street above, a balcony with a steel railing. We ran around the circle above the ice-skaters, mesmerized by the sights, the music and the smell of the fresh chestnuts, the three mothers “simply could not resist.”

At Christmas the tree-lined pathways of the arcade are decked out in their holiday finest and lead to the giant tree in the middle and along the pathway from Fifth Avenue, the row of Herald Angels.

Hundreds of excited children and their parents mulled in the enormous vestibule of the theater enjoying the spectacle of it all. 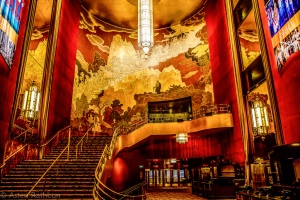 We whispered reverently, our eyes transfixed on the ceiling. My mother grabbed my collar. “Will you get a move on. I want to get orchestra seats.”

The majestic stage is encased in a dome in shades of gold liken to a sunset, a golden curtain across the back. The rows of seats curve upwards from the bottom of the stage … over five thousand soft, wide seats that push back for comfort.

The three women rushed to the middle to give each of the children, even the shortest, a grand view of the show. Carefully the mothers took hats, gloves and coats and began folding and stuffing clothes in their large bags. For an added measure they put pillows and coats under the shortest children and stashed the rest under the seats.

We sat in one long row with the three mothers positioned at the beginning, the middle and the end. It was hard not to admire their organization, their stamina and the den-mother patience with each trip to the bathroom, spitting up, the constant and persistent flow of questions, giggles, interruptions and tantrums of eight children aged six to twelve.

As the show began to unfold, we became uncharacteristically quiet and still. Not wanting to miss one second as the stage moved up and down in three parts, revealing Christmas scenes like real ice skating, the Nativity with Joseph pulling Mother Mary on a real donkey, and a giant tree, rising from below to the squeals of the audience.

In the darkened theater we sat mesmerized by the sounds, the lights and the best of all, the Rockettes as they slowly began their final routine; arms and legs in perfect unity, kicking one, two and three … one, two and three … kicking and circling … kicking and fanning the length of the magnificent stage … adults and children, babies and old women fascinated by the perfection in their dance.

There were three more trips to the bathroom with the youngest children as the Wurlitzer was winding up intermission. When we heard the announcer warn the audience to come back to their seats, each child got the second half of their chocolate bar. Then the final delight, a full length movie.

My fondest memory, the year White Christmas premiered at the Music Hall. 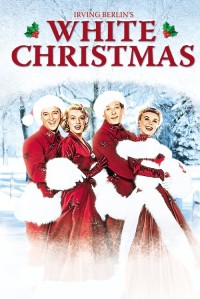 The Music Hall fell on hard times and had been slated for reconstruction. But thanks to Peter Allen, a wonderful Broadway entertainer, and many of his friends and patrons of the arts, the Music Hall has been preserved for generations of adults and children to enjoy.

Well there you have it … week two … well  it is the “new morning” version. The one I did after twelve hours of frustrating stuff yesterday is in my archives. I do trust that anyone reading me this morning enjoys this shorter post with another great place within walking distance of the Marriott Marquis.

Tell me if you will …

What great local sights have you visited within walking distance

of a writer’s group or conference?

fOIS In The City

Note: Since two comments have been left already regarding the Met, next week, I will re-post my tour of New York’s famous museums.

Good wishes to all for a better year, or the best year. These are a few of the wishes I have for you.

If you lost your job, I wish you find one that is better than the last, pays you more; one that gives you the joy of a job well done at the end or your day.

I wish you love, one that can find you on your worst day and never see a difference.

I wish for you health and good times you can share with your friends and family after the holiday craze is gone. Have a good time for no reason at all. Take care of yourself because someone you love needs you.

Read a good book and cherish the word.

If you are published, may your sales soar through the sky. If you are aspiring, may you get the dream agent and publisher you desire.

When you’re sitting alone, listen to the music in your heart and be at peace. When you get lonely, become your best friend and laugh out loud.

Make these days count. They never come around again and you should savor every moment you are given in this world.

Happy New Year and thank you so much for reading me, supporting my small effort to entertain or enlighten and above all else, stay in touch.

See you next year,

fOIS In The City

There is a season …

Soon it will be a New Year. Once again we will turn the page and find another beginning. Relentlessly, the pages turn and bring us to another day, a better way.

The wheels inside the clock, count off the seconds we have been given, though we never know how many. Have we squandered those precious seconds, let too many of them slip through our fingers? There is no answer to that question and when the end comes, it is always too soon. 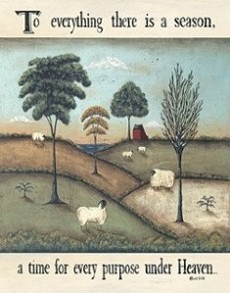 Our choices make us who we are, the sum total of those seconds as they tick away until the last when we may meet our Creator, go on to another world or like a boomerang, be sent back to try again.

Do it better this time, be kinder and smarter, find the answer to the cosmic puzzle of who we are, where did we come from and where in the stratosphere are we going?

All the good books seek to teach and enlighten, shine brightly in the heavens and give us an insight we have yet to appreciate. I give you one of my favorite passages for its beauty and wisdom. If there is any truth in our universe it is indeed … that for all things under heaven … there is a time.

May this be your time,
fOIS In The City

Tagged as A time for everything, Creator, seasons, under heaven